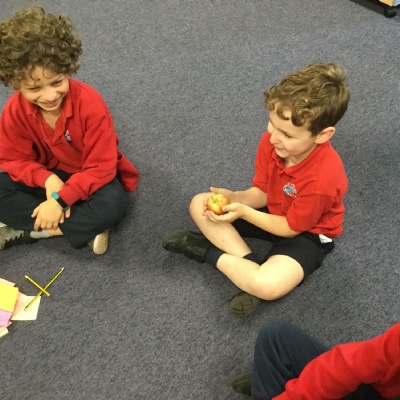 Year 3 are learning to think about the impact of what they say and how they act towards others.

This week we have been learning about friendship and being kind. One half of the class compared two apples. At first they couldn’t see much difference between the two apples. We then passed around the apples treating the first horribly; saying unkind words to it and using unkind hands to throw it on the floor. We then passed around the second apple carefully, complementing it as we did. We compared the apples again and there did not appear to me much difference on the outside. We then cut the apples open and we saw that just the apple we treated badly was completely bruised on the inside. We linked this to the behaviours and events that can sometimes happen in the playground – that even when someone does not look like they are upset, it does not mean that they are not hurt inside. We then shared ways to be a good friend.

The other half of the class wrote random names down on a piece of paper and then scrunched it, stood on it and shouted it at. They then tried to smooth out the paper but found that they could not because it still had creases. We discussed the fact that once we have said something hurtful, it cannot be undone. You can apologise but sometimes those things still hurt. The children then wrote kind messages for each other.