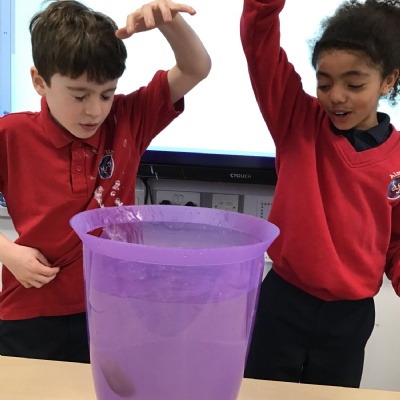 Last week, we saw that air resistance occurs. For example: when an aeroplane flies through the air because air particles hit the aeroplane making it more difficult for it to move through the air. It is the same for an object moving through water. If you go swimming, there is friction between your skin and the water particles. This is known as water resistance.

We worked in partners to make different shapes out of plasticine. We tested how the two different shapes moved through a bucket of water and saw that the vertical, pointy shapes sank quicker than the horizontal, flat shapes.

We moved on to explore the concept of buoyancy which is a force that makes an object rise or move forward in water. We made boats in teams to see if they could float thinking about the density of an object and its effect on an object. Plasticine is very dense so most of the boats sank. We need to think about materials to use in our boat building next time!