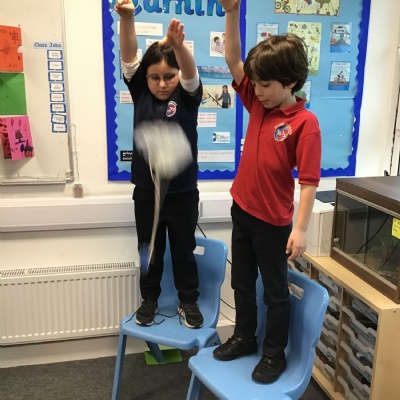 We have been learning about different forces in science. Today, we learnt about air resistance, which is the frictional force that air exerts against a moving object. As an experiment, we made our own parachutes out of plastic bags and string, which we attached to a toy car. We dropped the car and parachute from a height and experimented by dropping the same car without a parachute from the same height to then see the difference in the speed of how they fell. We saw that the car attached to a parachute fell slower than the car with no parachute because as an object moves, air resistance slows it down. The faster the object's motion, the greater the air resistance exerted against it.

We then went outside into the playground to watch Mrs Grunwald drop an egg attached to a parachute out of the classroom window! Luckily, the air resistance pushing on the parachute slowed down the speed at which the egg fell!